There is nothing worse than having a fat hole drilled in a stylish old case. I never really understood why people were doing such things and since I started collecting it really drives me mad to find reset buttons mounted into lables and chinch plugs protrude out of the back of your very expensive and rare 80s console.

Thanks to Flo, who donated me the parts and Torsten who put it all together, I finally had an composite mod for my famicom. Strangely I have almost all periphersls for it in its original boxes except the famicom itself, but as I recently bought one in its shiny silver box the old one was due to be modded. Here’s a post that shows all the parts and steps.

Flo did it the way, that I described above and has now two chinch ports sticking out of the back of its case. Bahhhh! No way. My idea was to use one of those OMTP plugs with four connections in one. A normal stereo terminal would have done the trick, but I want to have a standart cable with yellow, red and white plugs and not have to search for my specially soldered cable. So I ordered an OMTP mobile cable from ebay and soldered it to the mod.

Using the big profesdional desoldering station at work, my colleague managed to desolder the shielding of the TV modulator. It’s kind of tricky, as the RF plug and the shield are one part and as if this is not enough, an extra screw holds it and the voltage regulator in place. To my surprise the plug itself was also just soldered to the shield and could be easily removed with some more watts on the soldering iron.

Some hotgluegun session later I realized that the plug is to thick to fit under the shield with all the old components in place. Removing any parts from the mainboard, despite the RF plug, which can be put back in place, was no option. So on my second attempt I glued it in a little bit crooked. Now everything fits and tatataaa…. famicom gaming with sight and sound. Till now, I only had one or the other, as my trusty World Wide Video did not catch both bands. Now, there is a clear image and sound at once! Love it! Who can teach me to read kanji? 😉 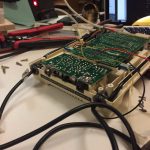 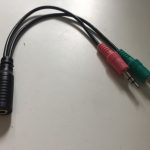 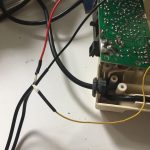 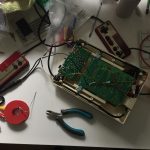 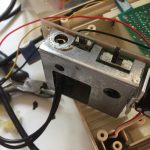 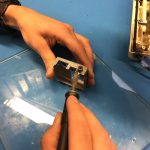 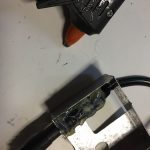 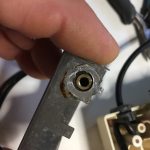 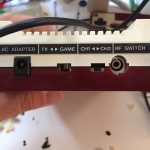 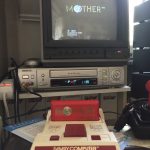