While I was waiting for my keycaps to turn from yellow into some kind of white again I was made some first tests on how to reproduce the acrylic plate. Back in the day they used offset print technique and put the PCB on the back and the plaque on the front. The back had then be covered with a black color on the second go, to give the traces and the golden C64 a good contrast.

My first idea was to do it with a vinyl cut, that I can produce at work and spray the gold color directly onto the plastic. I rebuild a tiny part of the PCB and the plaque/label from the front, cut it out of vinyl and put it on a acrylic plate. The gold color that we had lying around at work, was the real stuff, with all the chemicals that you don’t want to have near you. Having no access and no time to our painting booth, I just took the color and used a paint roller to apply it. Turns out the solvent was to hard and etched away the vinyl. Beside that, the letters on the front label were too tiny to cut them out. So beside having no good scan or photo of the plate to rebuild it, I still need to find a way to get the color on the plate as well. A friend of mine has an offset press… let’s see. For the exhibition, I will probably have no plate ready and so the golden C64 itself will have to do the show alone. 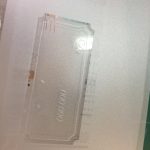 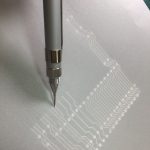 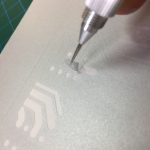 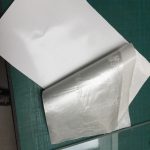 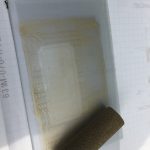 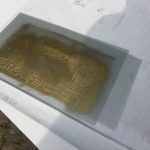 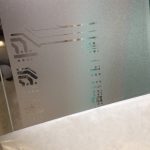 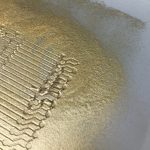 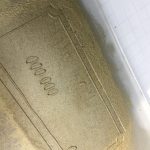 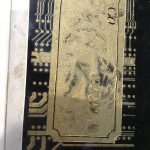