… this was the idea. With temperature above 35 degrees celcius, these days, I found my thoughts gravitating more around the task to find some cool drinks than anything else. In search for some cool spot at my working place, I found the basement to be very nice. There I spotted an old, mini-fridge, with a typical, but ugly RedBull Design. The guys from Cue Design – the owners of this little gem – gave me green light to rebrand it. What do you see, when you look at it? I saw a marqee, space for sideart and somehting like a screen, hence door. 😉  So something arcade it should be! Having restored the CPO of the seminal Discs of Tron cab for the “Film und Games – Ein Wechselspiel” exhibition in FFM, the choise was easy. Instead of Discs of Tron, I went for Drinks of Tron.

At first I took the graphics from the vector-lib and fixed them, as good as possible. The path are not drawn very well and so I reworked them along with the ordering an cleaned up some stuff. 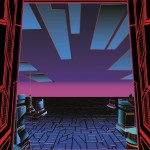 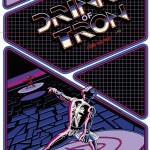 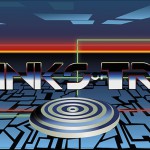 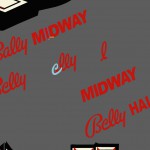 Next, I had to get rid of the old RedBull Design. Only stickers… that’s what I thought and indeed, stickers, but with some kind of heavy superglue that became somewhat fluid and sticky as hell, over the years. Took me almost 1,5 hours, tons of paper and industrial clean to get every bit off. I have never seen anything like this before. Anyway, now the fridge is clean, a new fluorescent tube is ordered and I already got the acrylic glass cut for the marquee. However I broke both pieces – I did order one in spare – when trying to bend it in to fit it in the brackets. Looks like I will have to do this again and than use a heat gun, to bent the glas. 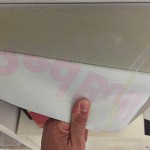 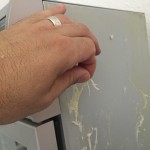 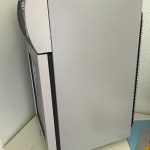 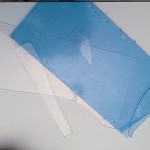 The top of the fridge had a big dent. A few screws and some brute force later, it is not really flat now, but a lot better. 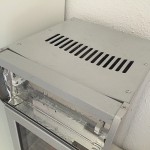 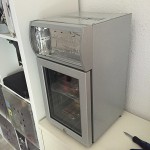 So for now I got all graphics printed. The side art still needs to be cut and than everything will be applied on monday. Hopefully I find some more flexible material for the marquee, over the weekend. 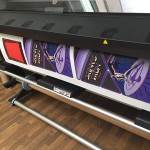 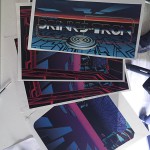 I anticipated this project to be done in 2 hours flat. Well, rebuilding the marquee completly in vectors, took me 2 hours alone and the sticky sh*t that held the old sideart in place even took its toll; but as I said above… it is hard to do something reasonable when it is soooo hot.

So, enough for now and did you see what happend to the original manufacturer logo? Belly Halfway….
cheers