It’s been a while… almost a year, once again that I wrote something here. Although WordPress is a fine and easy to use system, it is Facebook that gets all my posts. The feedback is more direct and interacting with your peers is in no time. Anyway, Facebook is not good at all, and who knows where this all ends, so here is a little update on the maker side of things.

My Samsung TV went bust. It just didn’t want to start up anymore, just producing some strange noise that sounds like the cathode backlights did not get enough power to go on. Opening the case showed that my assumption was right: Two of the capacitors where about to blow and already leaked. This was a quick fix.

Raising eyebrows for the location and the type of capacitors remain. There were 4 caps with 1000uf and two of them where 20v and the two that blew up, where 10v. Further all caps where placed directly besides a big heatsink, so that the thermal stress on those parts is enormous. Replacing the 10v caps with 16v versions did not just make the TV turn on again, no… it just doubled the speed on switching between channels. This all leads me to the conclusion, that my expensive flatscreen was built to last right till the warranty was over and the parts used where set to make you feel like you have and old lagging TV, getting slower and slower over time, so that you might think about buying a new one, that seemed so much quicker.

Parts: about 1 Euro
Reparitime: about 30 Minutes 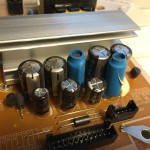 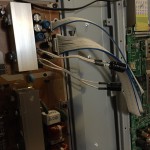 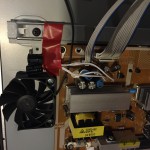 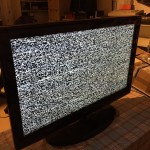