Computer Space and much beyond

It is not a good sign when you have to update your WordPress every time you log on. In this case it was even a two number digit after the last dot, meaning I had not been active here for the last two releases. Well, I have not been lazy at it might look, many things happened. The DRP team has a established a tiny room, dubbed “DRP lab”, where we can tinker around with our retro hardware and prepare our exhibitions. The pricetag for the room was actually too high, so we joined forces with some guys who had the idea of founding a maker space in Offenbach. By now the lab evolved and many people joined on the maker side. We do have 3D printers, and lots of other cool “toys”. Sadly time is still a missing thing and with my daughter Marie now becoming a real person – 13 month and cheeky as hell – most time goes there and this is just the way it should be.

Non the less, I could not hold my mind from coming up with crazy ideas. While I was building the Mini-Pong, I was already thinking about how to do a tiny version of the first video arcade game off all: Computer Space from Nutting Associates, Bushnells and Dabneys first fourray into the video games market. The cabin itself is one of a kind: Early seventies space grace done in glass fiber. The cabinet itself kept me from starting right away, but since we got a 3D printer in our lab… the idea seamed feasible. To this point I got the 3D Model ready for printing. For the entrails I have not quite made up my mind, but I think I will go with an Raspberry PI and an old 5″ CRT TV. The other option is to go with one of those Android TV Sticks, with a Composite out.

So far I got a basic model build and printed. As I tried to keep the polycount low it turns out a little rough around the edges, but a lot of sanding and grinding is required anyway. This was just a test, to see how things show up. I can tell you that this is really a nice feeling to see something completely virtual become a real life object, that you can actually touch and feel.

Now that it is sitting on my desk, I seem to be lucky that a 2.8″ display seems to fit in there. I did not take any measurements and just printed it at the maximum the 3D printer could… so what now. Build this thing correctly, or go with the raw model and use this as a basis. Guess I will go with latter option.

There is no direct emulation of Computer Space so far. As this was the first game of its kind, the whole circuitry was done without any IC, hence discrete logic. There is a simulator for non CPU based games called DICE, but Computer Space is not included so far – it seems that no one has the right schematics for it. So for now I took the long road and am looking into the ColecoVision port that came out recently. My wife was so kind and donated this really expensive pack for my birthday and along with the carts, you get a rom file. So the basic idea is, to cramp a RaspberryPi into my 3D printed cabinet, along with a 2.8″ display, running ColecoVision emulation through advmess… well, quite a task. I for one have not much experience on Linux and already failed badly to get advMess running. Kepp your fingers crossed that I find some time and advice. If someone out there feels like building an SD card image that boots directly into advMess running a Colecorom and basic joypad support, let me know. I would even pay for it. 😉

Herer are some pictures of the progress 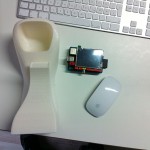 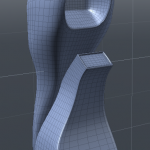 P.S.: After updating to WordPress 4 the visual editor goes completely banana… another thing that would need time. This is really the shit about our time. You start to do one thing and end up spending hours to find out about other things that have nothing to do with your initial plan. Hate it!