This year the Nintendo Entertainment System turns 30! As part of the digital retro park team, I decided to investigate  a little on the topic. About 10 years ago I read the fabulous book “The Ultimate History of Video Games” by Steven Kent, who really delved into the topic and outlined the story of Nintendos rise very precisely. Back than I was fascinated by the sheer work of the the Nintendo of America (NOA) Team that did not care about the big video games crash of 1983 and singlehandedly resurrected the video game industry. However fast forward to now and I am reading “Replay” by Tristan Donovan, who set the whole story into a global context and gives some further insight into that special time, giving me back the fever I had back than. This time around I am more of a serious collector as I have been 10 years ago and off course I have to experience the whole thing live and in full color.

10 years ago, when the fever got me the first time, I bought a Famicom from ebay. The guy wrote that it he never got it to work, as the power plug was missing. I wanted it non the less and bought it for a decent price. Over time I got the ill-fated Famicom Disc System and the Famicom 3D System, leaving a big whole in my wallet. Everything was neatly stored away in my room, never tested or used. Till now! Here are some nice pictures from flickr.com, that I shot for our  DRP project.

A quick research on the web revealed that the Sega Master System power plug should work. My good old World Wide Video recorder from Samsung is capable of decoding NTSC-J over the antenna and convert it to a proper PAL signal. Equipped with some Famicom carts that I got for a few bugs from ebay once more, I was ready to turn on the time machine and go back to the early eighties.

After setting everything up, finding the right channel and fine tune the frequencies, I had a proper title screen of Dr. Mario on my telly. With sweaty fingers I pressed the start button and a few seconds later I knew the D-Pad for the first player was gone.Opening it up showed the whole mess. The rubbers were dirty and two of the knobs had become brittle and where about to fall off. Well… what to do. I figured it is wise to grab a seconds player controller and just swap the rubbers, as those for player one are most likely looking the same. But ebay was not my friend, this time around. Then my mind went click! I had seen those very rubber pads before…. they seem to be the same as in the NES controllers.

I love fixing videos on youtube. Most of them are really crappy made, with guys explaining simple things like how to open a 3 screw-case. in order to clean the inside. This was very helpful, as I found both: a video of some guy opening a NES controller for cleaning and someone doing the same with the Famicom controller. Well, they do look the same, inside – even the cable mount is identical although the outer casing is completely different. Okay, back to ebay and now I am bidding on some NES controllers that are available in Germany and so cheaper than the original controllers that you can only get from Japan.

Non the less, I wanted to test the 3D System and therefore needed some kind of quick fix. Swapping the rubbers from pad two to pad one and cleaning everything with some warm water and soap did the trick. Unpacking the 3D System, that was factory sealed felt like christmas. The only cartridge game I got was Highway Star that looks like a tiny version of Outrun. The controlpad worked like a charme, but the goggles did nothing… not the slightest flickering and no 3D effect at all. Google knew it once more. All 3D games start in 2d mode and by pressing the select button the 3D is turned on. Woooow… filckery flickering thingy, right before my eyes, but not really a 3D effect. Facit so far: The system works, but needs new rubber pads for player two. The 3D system seems to work, but probably the convertion from NTSC-J to PAL is killing the sync as PAL is running 50Hz and NTSC usually runs at 60Hz. Lastly I dug out my old CyberBoy glasses and hooked them up. Well… same flickery non-3d stuff going on. At least this means that I can use these cheap googles instead of the original one. Nintendo did a good job by using a flexible band for keeping the glasses in place compared to Sega with the bristle-easy-breaking-full-plasic side pieces.

Next to test will be the disc system. I got another 3D game on disc. Let’s see if can get this working.

Here are some pictures of the cleaning and me tinkering with the 3D system. 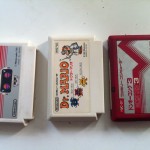 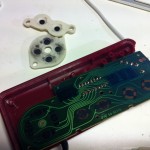 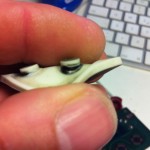 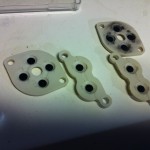 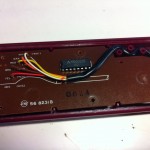 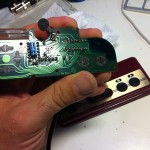 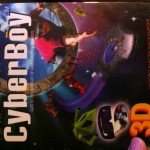