You can’t imagine how your sparetime really starts to vanish, when you have a kid at home. At the end of the day you ask yourself, “what have I done today” and most likely the answer will be you spent about all your time, watching and toddling with your little baby. Time – by any means – is an innovation of a pervert god: Whenever you have a good time, it passes too fast, and when it is boring, it stretches to infinity. But I can’t complain… no matter if retro stuff, or family, it is always a good time.

Yesterday, I had not much on my todo list and so I sneaked away from family for half an hour to test my disc system. Alex from the HNC/Homecom team donated me two NES controllers and a four score adapter for my birthday. Thanks for that again! One of those controllers was in bad shape with lot of yellowing and scratches all over. The perfect candidate for cannibalizing the rubber pads and the star/select button rubbers and transplant them into the second Famicom controller. Here’s the good news: Yes, they are compatible. The pads are off course from another production plant and some minor differences are obvious, but they fit in and work properly. Take care of the microphone on the second controller, when you take it appart. Microphone? Yes… actually this was Nintendos first introduction of a microphone into a control device. It never made it over the big pond and was removed on the European and USA versions. Later the mic came back on the Nintendo DS and on the Wiimote.

Okay. Controllers fixed and tested with Donkey Kong 3, which really looks like the original from the arcade, and now the disc system. Mine is properly boxed and in really good shape. The japan seller I bought it from claimed to have tested it, back than, and the belt had been renewed. I was about to find out if he had told the truth, but first I needed to find a proper power supply. A quick check on the original power plug showed that 9v DC was about the same as the Famicom needed itself. So another Sega Master System plug was just fine.

First contest was Legend of Zelda 2 and it started right away… no flaws, no hick-ups. Great! Playing a little revealed a flaw on my side: I don’t understand japanese… Okay next game was Famicom Grand Prix II: 3D Hot Ralley. It worked, but I was too lazy and time was too short to dug out and hook up the 3d system, so I played it a little in 2D mode. Tennis was next and worked like a charm but is kind of boring when played alone. Last game of my disc collection is Metroid that refused to start. Some kanji symbols on screen that I don’t understand and nothing. Probably a read error. As the system is known to prone to failure I felt quite lucky that 3 out of 4 discs worked. Generally I was surprised how fast the disc system loads games. Loading times are short and is by lightyears faster as a plain c64 for example.

Right now I am waiting for Falsiom and Cosmic Epsilon, another two 3d titles for the 3D system.

One thing that still bugs me: I don’t have any sound on the Famicom. Despite a short click, when I turn it on, there’s nothing. Maybe some capacitors have dried out or once again the convertion throught the world wide video is the problem… I will have to check this.

Some pictures and a video of Zelda booting. 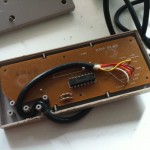 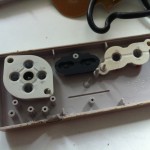 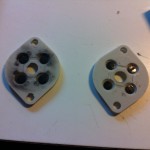