The Macintosh turns 30 this year – at 24th this month, to be precise. As long time apple fan I can not pass the opportunity and do a little something about this worldchanging anniversary, that premiered a machine that gave birth to my daily profession as a designer. As a member of the digitalretropark project I am looking forward to setup some Macintoshs at the For Amusement Only e.V. and have some sort of tiny exhibition, shedding some light on the creation of the mighty Mac and its people behind that made it all happen.

Off course I would need an original Mac from 1984 for this. ebay.com and a real cool colleuge over in the states presented me a Mac 128k (even one of the rare ones, which do have the 128k noted on the back), an external Super5 Drive and the famous travelbag. Perfect! Michael took all the stuff over here, when he came home for christmas, getting quite some attention at the customs at the airport. They hadn’t seen one of those in a long time… mostly not at all. So finally when I brought the baby home, I hooked it up to my stepdown converter and it came to life with the typical “ploing”. The grin I had on my face froze, after I noticed that the drive was constantly trying to eject the disk that was in there and sucking it back in. Mhhh… what would happen if I pull the disk out? May I boot of the external drive. With some tweezers I managed to get hold off the disk. It was completly stuck within the drive an it looked like the whole drive itself had somehow moved down a bit not letting the disk come through the slot.Disk A – so the lable from the retrieved disk said – was bootable from the external drive. Minifinder… what the heck? Anyway, a press on the Finder button and about 10 seconds later I was staring at Finder 4.2 and on the disk was MacWrite and MacPaint. Yeahhh! So this mac was usable. Not in the right way, but with some workaround.

Last night I sat down and took the little cube appart. The first bomb that I found was a leaking battery in the separated battery compartment. Those of you who have read my Facebookpost about leaking batteries in old computers know what I have been through. Horror! I wonder why Apple was so wise to put the battery far away from the mainboard, even in a separated complete closed compartment. It is a standart AA battery by the way. Looks like in the 80s everything had been more down to earth. 🙂

Ok, on with the floppy drive. First I took out the mainboard. A little sticker on the back said 512k and on the board itself the 512 was marked with a D… uuups, so this mac was updated already. One of the for screws holding the carriage for the drive got stuck and it took me about 45 minutes to get it loose. The drive itself was in good shape, little dirt and dust here and there. Apple did a good job to sell these bags along with the compuer. Guess this move saved lots of old Macintoshs lives.

The whole movable mechanic that is responsible for ejecting the disk was completely stuck. The grease from 1984 had turned to superglue. Isopropyl and WD-40 along with tons of q-tips did the trick. The disks are now going in and out as the drive was just new. I put it back into the mac and when I turned it on the head moved forward, hitting continuously hitting the far end of the slider. WTF!!! This was new. A search on the net revealed that the lightsensor that tells the head when reached initial position caught some dirt. After cleaning this with just a plain cutip – NO alcohol here, as it might melt the plastic enclosure of the sensor and make it even see less – the drive behaved as normal. Great…. but not for long. Every disk I insert is thrown out again. Okay, this hence the drive can’t read it. Maybe an alignment problem here. I hooked up the external drive and mouse again, booted from it into Minifinder, inserted a blank disk into the internal drive and became a message wether I would like to initalize this disk. Bingo! I hit okay, but the disk came right out again, with “Initialization failed!” message. Mhhh…. okay, what now. I cleaned the read/write head with Isopropyl once again, after I noticed some smudge on it, but after moving the head a few sectors it throw the disk back at me, with the same message as before. At some point I even got a 0F0064 along with a Sad Mac.

Another to tutorial pointed a screw that can be used to position the head more closely to the disk. I tinkered with this a little and managed that the drive would initialize a disk to about 80% before throwing it out again. Test with other disks were less fun: they came right out at the very beginning, not a single track initialized. I wonder why it works with this one disk. Also read tests with the Minifinder disk were in vain. Probably some dried capacitor or a miss-aligned head is to blame. Both things that are beyond my scope of repair skills, so for now I put everything back together.

Here are some links that really helped me:

And some images of the process. 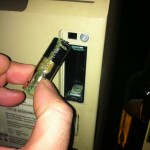 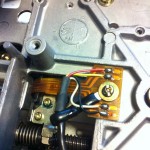 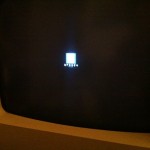 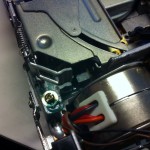 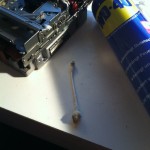 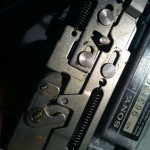 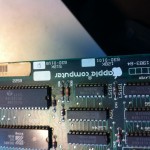 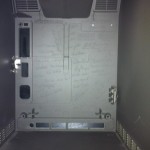 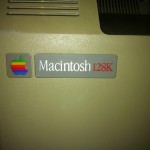 Ahh and yes: I am searching for a Backspacekey from and Apple M0110 (or similar) keyboard… mine chipped off and got lost.