Well, well, well. After one week of getting all the cables and adapters together I finally was ready to hook up the Magnavox Odyssey. Thomas dropped by and together we spent the whole evening to get this ancient hardware to show us something at all on screen. First there was nothing and we tried some other ways, plugs and adapters. We where not sure if we got a connection throughout this flywire setup. Remember: this console only has RF output and that is NTSC, hence you need a tuner that can handle NTSC and than you would need all the plugs and stuff to get it working… that’s what we though, at least. The station search on my trusty Samsung World Wide Video always stuck at one position and turning off the console by ejecting the game cart, showed that we had the right channel. However the image kept scrolling through and a visible vertical shift was there. Dots, hence players, where no where to be seen, only static noise all over. After some fiddling with different cables and wirings, we stuck our head into the service manual and located the J12 spot on the video summer PCB … that is labled „composite video“. Right when I made up my mind to open up the console and take my chances, we noticed the little hole in the bottom marked „horz“. A tiny turn with a screwdriver and the image was stable – still with lots of noise – but no scrolling any more. Yeah! Turning the knobs on the controllers brought up the dots. Oh yeah! Enough for tonight. 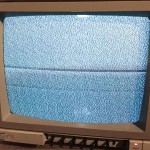 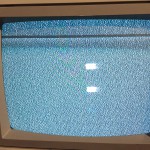 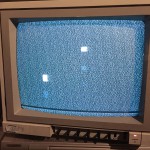 Here’s a little video of Thomas and me “playing”. 😉

Last weekend, I sat down and put a standard RCA jack into the adapter that the seller from ebay had luckily sent along. Now I use a normal RF cable, like those used on C64 and other systems of the early eighties. The brackets that were screwed to the switch box were rusty and came of quite easily, so i stripped down the wires and put new ones on. Much better image and yes, you can hook it up to a normal PAL TV… the image is only black and white anyway. No need for further equipment. 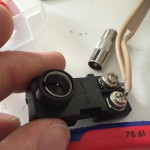 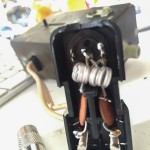 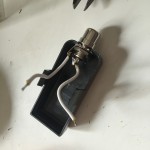 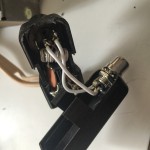 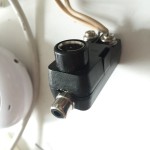 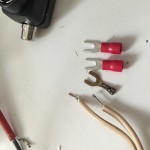 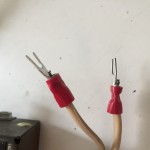 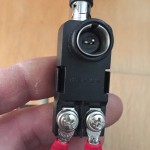 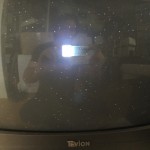 At the moment, the image is quite okay, but the ball is only going off screen on the left side. Only when player one holds the reset button pressed, it is showing up and vanishes when released. Old consoles seem to be like old ships … when you are done with one repair, the next shows up right away.