Collecting old computers and consoles is fun but sometimes it takes ages to get what you want. In case of the very first console that was ever to be released, back in 1972, it was just nothing more than a dream for me. Those machines are so rare in Germany, that it did not make much sense to look even search for them. Over the big pond, in the US, the Odysseys are very common on ebay, with prices mostly above $400. Concidering that there would be a big share for the postage and customs, this was far beyond my reach. This year I turned 40 and at my birthday party, I just told everybody to put some money into the piggy bank, instead of gifts. When the party was over it was enough money in there to go an buy one. Although I was fairly drunk I bought it right away and thanks to my ever supporting colleague –  who must have taken more than 50kg of hardware through the customs for me, by now (BIG thanks, Michael) – it hit my office desk at monday. It took till yesterday, that I finally found the time to take a closer look at my new baby. It seems that everything is there: all the papers, overlays and manuals. Condition varies from mint to some bad. The box has lots of wear and tear, but the stuff inside is in good shape. One of the buttons that hold the battery lit in place, is gone, but it stays firmly closed with the remaining one.

The console was concieved by late Ralph Baer that sadly past away this year. He invented the whole circuitry to bring up dots on the TV screen and move them around via paddle like contollers and that’s what the “games” are. There is only a rudimentary collision detection and all games have a maximum of three dots on screen. No playfield, no colours, no AI. That comes to no surprise when you know that this machine has no processor. The whole logic is done in discrete circuits. However Bear and his colleagues invented and patented even more means of controls and games: a lightgun and a stearing wheel that never got released, though. If you are interested, you should take a look at the Jörgs Interview with him, that he did for Scene World Magazine – actually the last official appearance of Mr. Baer, before he went.

Time to hook it up.

First thing I noticed, after inserting batteries (yes it can be powered with batteries)… there is no power switch. Mhhh.. a look at Angry Video Game Nerd revealed two things: The console powers up, as soon as you insert a cart and no, it does not have any sound. Okay, so setup the old trusty World Wide Video to get the NTSC signal converted to PAL, but hey, the antenna cable? Dubbed “game cord” in the manual that thing was missing. The guy who sold it on ebay did have the cable in the picture and wrote “works!” on the title of the auction – asked him and he said that it was there an most likely went into the package. Damn. Taking a closer look at the plugs reveals that this is something so awkward, and all people I asked never saw somehing like it anywhere else. Must be a proprietary thing from Magnavox. There is a guy at ebay selling modded cables so that you don’t need the switch box anymore, but they cost a fortune. In the end I got back to my colleague who had the cable still in his bag.

Puhhh… first odyssey is over. 😉

This weekend I won’t have the time to toy around with it, as we will attend Macoun and setup our Mac exhibition once more. But what I did start, is converting the overlays to proper vectorgraphics, that can be – if someone finds a printshop that has the material and can print on both sides – reproduced. The first 4 overlays are competed. Haunted House could need some more work on the details, but for now it is good. It is a real zen like work, to trace all those lines and rebuild the graphics, that someone did more than 40 years ago. Preservation work, that I really like to do. 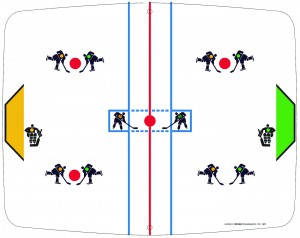 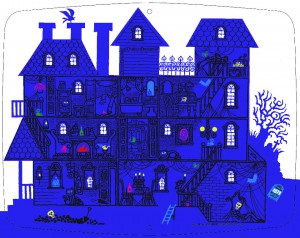 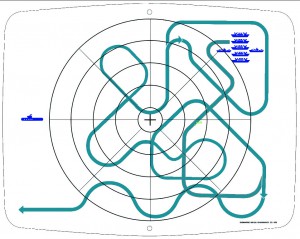 5 comments on “A tiny Odyssey … lost cables and traced overlays”