A visit to the HomeCon

This weekend it was retro time. The last month had been something of a no-time-for-anytging-fun period… even our game experienced no update at all. Recent happenings over in Japan are the biggest reason for us not to cary on at the moment…. we are not quite sure how things will be in the future an how and when we release the game.

So I was more than happy to dip m head into the past, took two of my best colectibles from the basement and went to visit the old school brigade. I paid a short visit to the previous HomeCon to find out that there are a lot of people collecting old hardware, building new add-ons, living up to the old times. I felt instantly at home (hence the name) so I was really looking forward to see the guys again.

The event was set to start at 10am. When I got there at 11 a.m. the room was full and if it wasn’t for Mug, who piled up his Amigas and provided me some space, I would have to set up my stuff on the toilet.

After setting up my Atari Video Music, I took a first look around. Noticeable things where a FM Towns II and a carMarty, two Vectrexes, some tabletops and tons of modified Amigas, Ataris and C64s. Foremost I have to mention Ankabantas C64 with imtegrated headphone amp, reset- and hardreset button, multirom switchboard, multicolor LED (pulsing through all spectrum colors) and a milliom things more I can’t recall. The other “object” was SailorSats Mother of all Amigas, as he called it. I didn’t notice for half the party It took me almost the whole party to notice that in his Amiga 500 was an PC running windows. He created some small routines that made windows look and feel like the real thing; he even vonverted the two topaz fonts….. Absolutly insane. Hopefully we will see a release as themepack, along with all essential scripts the scripts. 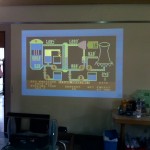 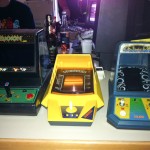 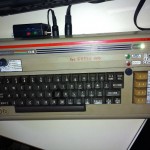 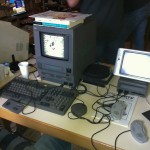 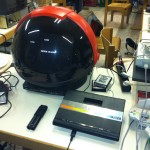 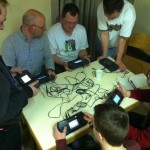 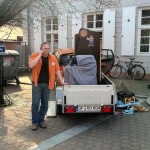 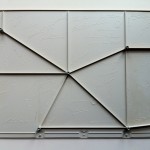 After a long and uncomfotable night on the ground, most of the visitors were gone. I enjoyed the silence and started setting up my soldering gun. Two hours later I had hacked a wiimote to hook up a real joystick and arcade buttons. Since I first saw the iCade at thinkgeek.com and got frustrated by trying to order one right away, just to find out that it was an aprils fool, I had the idea of building one myself. Meanwhile you can order the real iCade and Atari is on the line with license some hits from their backcatalog, but I was kinda scared off. So hacking this wiimote was the first step and two hours, because I really had no sleep at all and had to things over and over again. After all you can see a little proof of concept, that it basically works, although the directions are rotated the wrong way. If it wasn’t for Muggy helping me with the voltmeter and stuff, this would probably would have all gone up in smoke. Thanks, man!