building the Fix-It-Felix Cab for DRP

I don’t know if I mentioned it before that most of my spare time goes into the digital retro park project. The basic idea is to do what we can best, namely preserve, talk and repair old hardware and put it into a modern context, show the beginnings and relate to the present. So far we have a strong concept, with lots of nice exponates and talked to a couple of officials in Hanau, Offenbach and Frankfurt, with not much success, to be honest. Non the less, we adhere to our ideas and in the search for a cheap room and potential sponsors, we do promotional stuff now and than. The latest clue can be seen and played at the Cinemaxx cinema in Offenbach right now.

Disney launched nine revamped Donkey Kong cabs, playing Fix-It-Felix Jr., as promotional gag for this years ComicCon. (For those who don’t know who Fix-it-Felix, nor Wreck-It-Ralph is… head over to Disney and take a look.) Soon it became apparent that 9 were far to less and so they build another 50 cabs from scratch. The game itself was coded on a modern Windows plattform, but the cab and all the signs were trimmed to look and feel like it is a real cab from early 80s – even the copyright notice states 1982. We pitched the idea of having a little arcade in the cinema to the Cinemaxx marketing people and they agreed. When the deal was struck, we had about 1,5 weeks left and the following weekend, 1 week prior to the premiere of Wreck-it-Ralph (Ralph reciht’s in German) we had the idea to build a Fix-It-Felix-Cab. Hessi donated his generic cab and so we rebuild the control panel to be as close as the original as possible. Than I sat down and reworked all the graphics needed. RidicRick has done some marvelous work before, but his files were done in Photoshop, hence pixels and so hard to transform and scale. Took me three days and I adjusted some spots that I found being a step off the original and used screenshots and pictures I found on the web. Printing an applying the big stickers was handed over to my colleague Björn, who broke a new record in revamping an old cab. Took him about 20 minutes and everything was on and the cab looked completely different.

Mark from FAO got the task to get the flashgame that Disney put on their website into the cab. This was my biggest concern, to get this falsh stuff running properly. No one on the net seem to have the original game form the promo cabs. Three days prior to our roll-out, we got the game and we were good to go. Mark stuck his head into the code and wrote a loader that would start the game right away, as soon as the PC is turned on. He put in an SLG3000 that adds scanlines and some distortion to the far too clean VGA screen, making it looking like a screen from the old days. Yeahh!

The final assembly was done at FAOs open door day and 2 hours late with visitors putting their heads into our cab, we got it working. That same night, we packed it up, along with Pole Position and Donkey Kong (sadly only in the german cab version) and drove it over to the Cinemaxx. Done with the setup, I replugged the Fix-it-Fleix Jr. Cab and… nothing. By than it was 1.00 a.m. and so we gave up for that day. I gave Mark a help call and on suturday, right before the childerns program straed, we got it working again.

Most kids recognized Fix-It-Felix Jr. but rather played Donkey Kong but that changed after they saw the movie.;)

The official premiere for the rest of us is tomorrow and if you are close to Offenbach and feel like playing a bit, come over!

Here are some pics of the project, showing the process… I can fix it! 😉 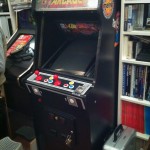 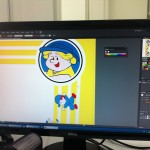 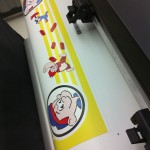 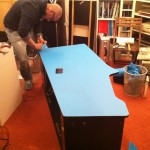 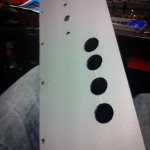 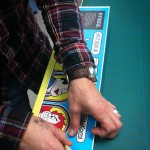 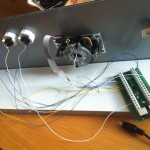 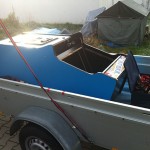 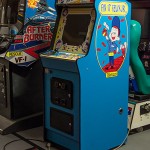 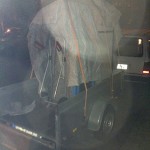 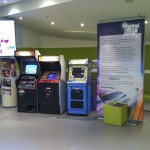 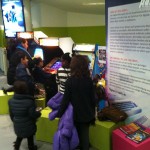 One comment on “building the Fix-It-Felix Cab for DRP”