Mac around the clock

One should think that the hunger for digital toys, computers and gadgets vanish once your kid is born – truth can’t be any further away. 😉 Instead of spending time with my wife, I put myself into the position of making a 30 year Macintosh exhibition. I must admit that I totally underestimated the effort it would take to have a tiny room converted into something for visitors to spent some time in. Partly it is due to me having no clear vision of what I want to achieve, partly because I am dependent on other people to help me with things I am not good at and to some extent it is because of Apple being such a turbulent company with so much to tell about. I literally got lost in all the facts and almost every day I find something new. Today that was something special:

I was well aware of the fact that capacitors tend to leak and get bust after a certain amount of time but I was unaware that they seem to fail always at a point where it really matters. For the exhibition I dug out my Mac SE30, Classic I and Classic two. The first is running, although the 20meg harddrive had some trouble to boot properly. It turned out to be dirt on the drives external (!) light barrier for positioning the head. This was a quick fix. The Classic I had a leaked battery that burned some part of the board and leaking capacitors and those had the Classic II as well. Classic II is back into business after putting the PCB into some warm soap water, cleaning off the leakage. Not a permanent fix, but should last for those couple of days.

The worst part so far was my Mac 128k that I got from USA. I took it to the Homecon in order to prepare it for the show and it went bust. The powersupply ist making a clicking noise and the current seems not to pull up. Right now a colleauge of mine is trying to fix it and I got a Mac Plus from ebay, to have something in my backhand, despite this model was missing in my collection anyway.

The Mac plus arrived a couple of days ago and a quick test showed that it was in working order, dirty as hell, but with a functional disk drive. Further tests showed some strange behaviour: The system seemed to have some sort of short circuit that made the computer turn off and on again. Now I had the time to debug it and what I found was absolutely true to the word itself. On the main board was a tiny grayish thing. A closer look revealed that it was a rotten slater that got stuck between two legs of chip. Removing it, cleaning the board with some isopropyl and putting everything back together made the mac come to life and it is running now, while I write this post. Problem solved and so classic Mac no 3 is ready for the exhibition. 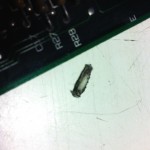 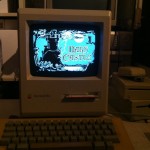