I always wanted an Apple //c, since I spotted one, back in our school in the early nineties. A few years ago I got one from a bootsale but it was missing all cables and the power supply, not to mention the driveledge was broken. On eBay I way occasionally bidding on one and last year missed the chance to get one for really cheap, as I told the guy that would only pay a maximum of fifty bugs for an untested computer that was missing all cables again. He put it up on the bay and it ended with a staggering 90€ pricetag. Since than prices seem to have rosen even more.

Last week a //c showed up, along with a bag, monitor with stand and second external 5 1/4″ diskdrive. I got it! Not quite cheap, but with all the extras and this groovy monitor it was okay. The lady I bought it from must have some special deal with the postoffice, as it was here the next day… I never got a big package that fast.

The first thing when unboxing was an evil smell of old cigarette smoke. I could stand it for five minutes, than Nadine came down from the upper level and asked me if I was smoking secretly. The poor little Apple looked the way it smelled. Yellow and black where the primary colours (a fresh Apple //c is almost white) and the first bootattempt showed that the smell seemed to be the minor problem here. The screen went green and was covered with jibberish chars all over. I kept it turned on, while asking google for help. After 10 minutes or so, it came up after I truned it on again. Instead of the “Apple //c”-notice it still kept saying something like “asihj $%”. Every reset showed new effects. Sometimes I ended up in the command prompt, another time it kept pumping out hexdumps…… something was completely wrong. Half an hour later, I managed to load a game but the keyboard was gone. I contacted the lady and we agreed on half the price, leaving me with a computer that was actually intended to look and act like a swan but it was more like a drunken elephant that had spent the whole night under the bar table. Nadine was so kind and handwashed the bag for me (it is still drying in the bathroom) an I started to get the baby back to life.

Took me almost 4 hours to take it appart and clean off the smoke and dirt. I completly drained the keaboard and used a special plasticcleaner, that is refered to as pigpiss by the guys of  For Amusement Only e.V., because it solves all that yellowing caused by smoke. The remains are a yellowish soup that stinks like pig peeeee. 😉

After letting all parts dry and putting it back together the moment of truth came. The first start showed a clean “Apple //c – Check Disk Drive.” and it loaded everything I put into the drive. Great! Testing it with some games the keyboard got stuck again, repeating the last key pressed forever. Google showed me that this seems to be a common problem with the //c and a fix would include bending off a leg of chip on the keyboard…. I didn’t do it and thought to myself that this little treasure is just out of training. Every time I kept it running for some time the symptoms got better and by now it works fine. Apple! Building selfrepairing hardware since 1977. 😉

I was not able to get all the yellowing off, but most of it. The rest is the typical yellowing caused by UV exposure (probably a harder form, mixed with tobacco smoke in my case). Half an hour ago I fixed the Apple II joystick that I got some time ago. Directions where working, but the buttons where dead. Some Spiritus on the switches and we were good to go. Here you can see some pictures and a video of my new lad in action. Besides, playing Choplifter with one hand an filming with the other is a real task. 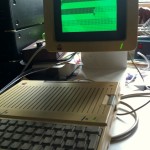 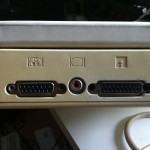 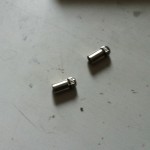 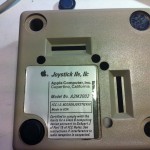 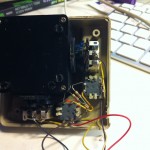 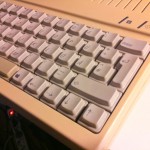 Next thing to do is replacing the drive port, as the nuts got pulled out by some budbrain and testing and cleaning the external drive. Keep your fingers crossed that it works.